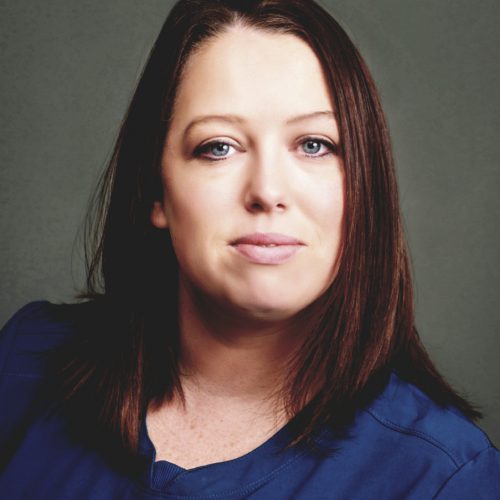 After graduation, Catherine started at University of Missouri Healthcare on the Observation/Short Stay Unit. After 18 months, she was asked to step in as a temporary supervisor for the Observation/Oncology Unit. During her time in that position she realized that her future in nursing was taking her down the leadership path vs. the NP path she had originally thought and she began to research Master’s programs. She applied to only one Master’s Degree Program at the University of Missouri and was accepted. She is currently in her second semester of her Master’s in Nursing Leadership and Administration. Also, during her time as a temporary supervisor she was asked if she would be interested in working with the administration on opening a new unit in the hospital. She said yes and worked hand in hand with hospital administrators, directors, the CFO and the CNO and helped to open the Medical Bridge Unit, a general floor inpatient admission unit. She currently works on the floor of this unit as a nurse and she oversees daily activities to help resolve possible issues that arise with a new unit. She is currently working towards becoming a permanent SLS (education specialist supervisor for new graduates and hires) and has been a facilitator for new graduates in the nurse resident program for the past 2 years. With her plan to graduate and become a Clincal Manager in the hospital setting, her ultimate goal is to become a Hospital Director. At just over two years as a nurse, she has been awarded the nursing role model award from the University of Missouri Healthcare system and recently completed and passed her certified Med-Surg test. She can now add a few more letters to her name badge, Rachael Connell CMSRN BSN.