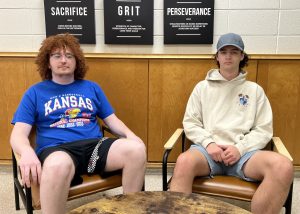 Camden Phillips, a sophomore from South Dakota, put up a 4-2 record in preliminary rounds and advanced to Octofinals where he lost a close debate to the University of Nebraska-Lincoln.

Seth Carter, a freshman from Kansas, put up a 5-1 record in the junior varsity division in preliminary rounds. They won two elimination debates to end up in finals versus the University of Nebraska-Lincoln where they lost a close debate to take second place overall in the tournament.

By advancing to elimination rounds, both Camden and Seth are now qualified for the NFA-LD National Tournament.

Also competing in the junior varsity division were Eva Agcaoili from Missouri and Sha Wilson from Texas, who both compiled 3-3 records and were one win away from qualifying for nationals.

To learn more about MVC Debate and Forensics including scholarship opportunities, contact bowersd@moval.edu.