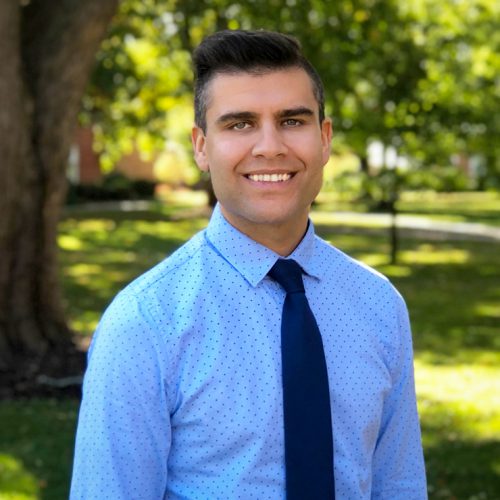 Dr. Alexandros Fragiskatos teaches percussion, core music courses, and directs all instrumental music ensembles. His diverse musical training as a percussionist has led him to performances across the U.S. and Europe, including a solo percussion recital in Athens, Greece in 2018 and a Switzerland tour in 2016 with the Arizona Contemporary Music Ensemble. Dr. Fragiskatos has also commissioned and premiered new works in a variety of settings by composers like Stuart Saunders Smith, Peter Garland, and Tom DeLio. As an orchestral musician, Dr. Fragiskatos has performed with the Akron Symphony Orchestra, Richmond Symphony Orchestra, and Missouri Symphony Orchestra, among others. Beyond orchestral and contemporary music, he has performed in numerous musical theater shows, and has been playing steel pan (steel drum) for over a decade. Many of his steel band arrangements are published and have been performed across the U.S. and internationally. He has been featured as a guest artist with Phoenix College in 2017 and the University of Missouri in 2019. Dr. Fragiskatos is also a regular contributor to Percussive Arts Society’s digital publication, Rhythm! Scene. Prior to Missouri Valley College, he taught at Grand Canyon University and the Maricopa County Community College District in Phoenix, AZ. Dr. Fragiskatos received his Bachelor of Music in percussion performance from the University of Cincinnati College-Conservatory of Music, his Master of Music in percussion performance from The University of Akron, and both his Doctor of Musical Arts in percussion and Certificate of Music Theory Pedagogy from Arizona State University. For more information and videos of performances, visit  https://fragiskatospercussion.com/.